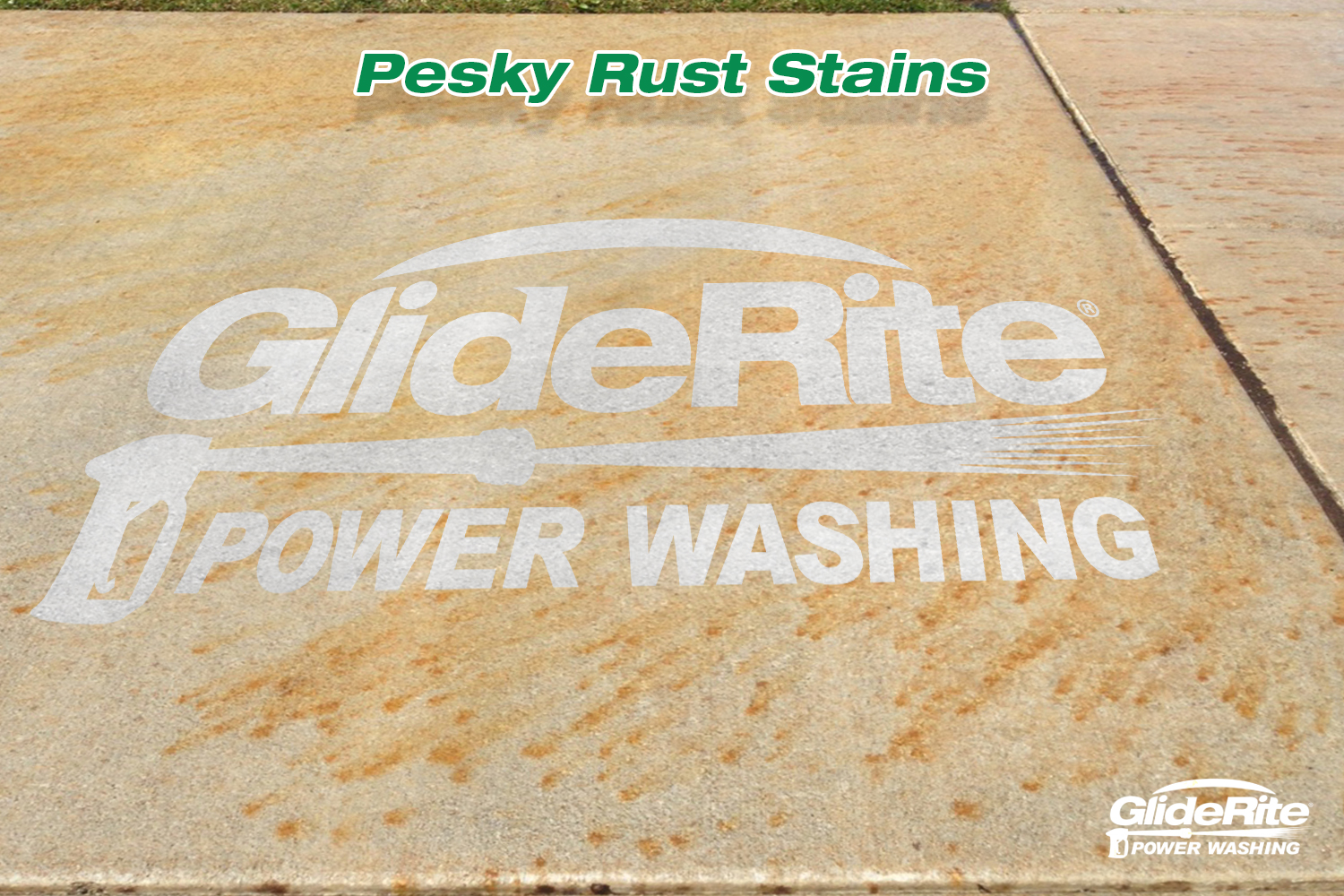 Posted at 10:00h in Glide Rite News by Glide Rite

Rust can ravage concrete when left unchecked. Not only is it unsightly for your business, but it can harm the concrete as well. When rust is left sitting on concrete, it can cause the concrete to crack or erode. This is because when iron (or iron alloys) gets wet and turns into rust, the rust occupies more space than the original iron. When the iron oxidizes, it expands to make rust. This rust, when left untreated, can harm your business. Luckily, Glide Rite Power Washing knows exactly how to handle these pesky stains.

Rust is formed by the oxidation or corrosion of iron or iron alloys, like steel. Oxidation is the process of something reacting with water and air, like iron, and turning into a new compound, like rust. Rust’s technical term is iron oxide.

What are rust stains?

Rust stains can happen from several different occurrences, the most common being from iron or iron alloys sitting on concrete. Examples of this would be benches, tables, chairs, light posts, chains, and more. When it rains on items made from iron, and they begin to rust, the rain carries particles of the rust down onto the concrete, where the rust seeps in and stains a deep red-orange. Sometimes this can be mistaken for a dirty sidewalk if the color is not highly saturated, however the pigment can’t be swept away easily by any kind of broom or regular power washing.

Rust can also stain sidewalks indirectly. For example, say a sidewalk near your business is also near a patch of grass or some plants that get watered every day. Whether that watering be through an underground watering system or manually, sometimes rust can sneak its way into the water system. If the system meets up with iron rod conductors at any point, it is possible for rust to form in those rods and then carry over into watering the plants or grass. If the water comes in contact with the sidewalk, either by splashing over or runoff, the rust in the water can stain the concrete. Water lines can also be disturbed and contaminated with rust if there is local maintenance work or a sudden, large movement in the ground (like an earthquake).

Getting Rid of Rust Stains

Rust stains are not easy to get rid of, that is, if you don’t know how to get rid of them. Glide Rite is proficient in clearing away rust stains for good and making the concrete look brand new. Clearing rust stains takes a precise level of pressure and special chemicals to fully rid the concrete of the stains. Consequentially, if the improper use of chemicals is put on the rust stains, it can further oxidize the rust causing the color to further pigment and seep into the concrete.